Some time ago several articles about ShareMap.org were published on many important GIS related blogs and sites[1]. Now ShareMap is slowly phasing out from beta stage. Feature set is almost complete and dozens of maps created with ShareMap enriches multiple Wikipedia articles [2].
There was two major and important features that was introduced recently

OpenStreetMap is enormous source for geospatial data. Implantation of import mechanism from OSM was one of first features of ShareMap. But sometimes OSM data is not enough, especially when we try to create historical map. For example if we want to create map of dismantled tramway system in Cleveland we cannot find information about track position at OSM. But we can reuse pre war map of system (with expired copyrights, so it is 100% comply with Creative Commons license). We can treat this old map as overlay to our interactive map, but first of all we have to calibrate it. In simple words calibration is just selecting of several calibration points on raster map (old one) and interactive map. After point selection the system warps. The well known open source GDAL library is used. In this video map calibration process is described in detail [3]. 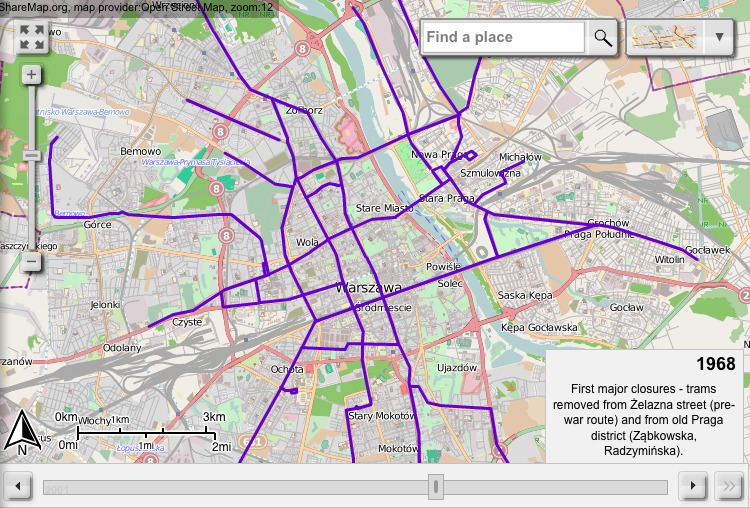 Maps are not only latitude longitude and altitude of points. There is one more important factor – time. Some geospatial features exists only for limited timespan. Railway line to Ballachulish in scotland was build in 1904 and demolished in 1966. For viewer is very useful to see dynamics of processes – changes of routes, borders, points etc. . This is a key factor for creation of good historical maps. From map creator perspective adding timeline to existing map is very easy. Editor has just to fill the timespan fields of object on the map.
You can see example map (construction of tramways in Warsaw after WW II) here. [4]. Screencast tutorial about animated map creation will be available soon.

Work still in progress:
Now we are focused on improvement of existing features, fixing bugs and writing documentation.
There are still some export features that are missing – animated SVG files, export to animated GIF’s , MP4 and YouTube. We are also working on mobile viewer for ShareMap maps. Old mobile alpha version is reworked and soon will be published for Android and iOS on app stores.